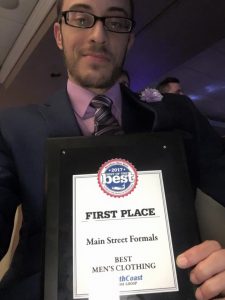 As the saying goes, awards aren’t everything, but it sure is nice to be recognized by your customers, peers, and the community we serve! Since taking ownership of Main Street Formals in 2005, the Brunelles and their talented staff have been blessed to receive the following honors and awards:

First Runner Up, Best Men’s Clothing Store, SouthCoast Media Group, 2020 & 2019
For two consecutive years we have come in second to Carter’s Clothing (who are good people, no doubt). “Technically” that means we’re still the #1 formal shop in the area (Carter’s is casual wear), but honestly, after winning this in 2017 and 2018, second place feels like kissing our sister, and that’s just plain gross. Carter’s Clothing, look out, ’cause we’ve got our sights trained on you for 2021.

Recognition Service Award, Prince Henry Society, 2019
Main Street Formals is honored to report that in February 2019 we were privileged to receive the Recognition Service Award from the Prince Henry Society in observation of our philanthropic support to the Greater New Bedford community. We are humbled to be included among such distinguished company, and we thank the Society for their congeniality, hospitality, and long-standing record of community service throughout our region.

Best Men’s Clothing Store, SouthCoast Media Group, 2017
In 2017, the Standard Times and SouthCoast Media Group invited readers and subscribers to select their favorite businesses in a plethora of categories, and while we had to face some stiff competition, Main Street Formals was honored to accept the coveted title of Best Men’s Clothing Store on the SouthCoast. The honor was commemorated in an elegant red-carpet gala, where our resident (and self-appointed) customer service champion Brad accepted the handsome plaque we now display in our office.

Small Business of the Year, New Bedford Chamber of Commerce, 2013

We’re not going to lie: We have no idea how the stars aligned for us to capture this award. Special thanks are no doubt due to longtime City Councilor Linda Morad, who nominated us for this award, which was a tremendous honor for which we are very grateful. Rumor has it that if you talk to Robert long enough, he will be sure to shoehorn it into the conversation. We’re going to ride this pony for a long time. Just ask Nicole at Black Tie Cookies, because she is pretty much done with hearing about it. (Maybe her next cookie flavor should be Peanut Butter & Jealous.)

National Semi-Finalist, Best Wedding Marketing, Wedding Wire, 2016
We take a lot of pride in our marketing efforts, which Robert manages through his separate marketing company, and so when our Style Guide made the semifinals for this national award, it was pretty heady stuff, and it was extra-special for us, for the photos were all of “real weddings” we’ve done. (Special shout out to our friends at ImageMakers and Nelly, who provided the great shots). No, we did not win, but it was an honor to compete with some of the best in the nation.

So pleased to be able to recommend Main Street Formals to ALL of our prospective brides. You always make us proud!